The Sage Group plc, commonly known as Sage, is a British multinational enterprise software company based in Newcastle upon Tyne, England. As of 2017, it is the UK's second largest technology company,[2] the world's third-largest supplier of enterprise resource planning software (behind Oracle and SAP), the largest supplier to small businesses, and has 6.1 million customers worldwide.[3] It has offices in 24 countries.[4] The company is the patron of the Sage Gateshead music venue in Gateshead.[5]

Sage is listed on the London Stock Exchange and is a constituent of the FTSE 100 Index.

The Company was founded by David Goldman, Paul Muller and Graham Wylie in 1981 in Newcastle, to develop estimating and accounting software for small businesses.[7]

A student at Newcastle University, Graham Wylie, took a summer job with an accountancy firm funded by a government small business grant to write software to help their record keeping. This became the basis for Sage Line 50. Next, hired by David Goldman to write some estimating software for his printing company, Campbell Graphics, Graham used the same accounting software to produce the first version of Sage Accounts. David was so impressed that he hired Graham and academic Paul Muller to form Sage, selling their software first to printing companies, and then to a wider market through a network of resellers.[8]

In 1984, the Company launched Sage software, a product for the Amstrad PCW word processor,[7] which used the CP/M operating system. Sage software sales escalated in that year from 30 copies a month to over 300.[7] The Company was first listed on the London Stock Exchange in 1989.[7]

In 1994, Paul Walker was appointed Chief Executive. In 1998, Sage's Professional Accountants Division was established. In 1999, Sage entered FTSE 100[7] and launched a dedicated Irish division, based in Dublin as well as its e-business strategy. In that same year the UK acquisition of Tetra saw Sage enter the mid-range business software market.[9][10]

The Sage Gateshead music venue, located on the banks of the River Tyne, is named after the company.

In 2000, Sage shares were named 'best performing share of the 90s' in the UK business press.[11] In 2001, Sage acquired Interact Commerce Inc.[12] and entered the CRM/contact management market and in 2002 Sage won 'Business of The Year' in the National Business Awards.[13] Also that year, Sage sponsored the new Music Centre in Gateshead for £6m – now known as Sage Gateshead – the largest ever UK arts/business sponsorship.[14] Sage are one of two technology stocks listed on the FTSE 100 Index,[15] the other being Micro Focus.[16] In 2003, at age 43, Graham Wylie retired with 108.5 million shares in Sage worth £146m. He was rated Britain's 109th richest person in the 2002 Sunday Times Rich List.[8]

On 19 April 2010, Sage announced that its CEO, Paul Walker, had indicated an interest in stepping down from his position, which he had held for 16 years.[18] The Financial Times reported that his departure would lead to speculation over Sage's mergers and acquisitions, which have been a key component to the group's growth in the past 20 years.[18]

Walker was one of the longest serving CEOs of an FTSE100 company. Walker left the company on 1 December 2010.[19]

On 31 August 2018, Sage announced that Stephen Kelly had stepped down as a director and CEO.[26] On 2 November 2018, Steve Hare was appointed CEO.[27] Hare had been Chief Financial Officer of Sage since 2014 and had been interim COO following the departure of the previous CEO.[27]

On 1 July 2019, it was announced that Sage would relocate from its headquarters in Newcastle Great Park to a new location in Cobalt Business Park.[28]

In March 2020, Sage announced that it is offloading its Brazil operations to the president of the local business, Jorge Carneiro, in a deal estimated to be valued at £1 million with an additional deferred consideration of up to £9 million.[29][30]

Founded and headquartered in Newcastle upon Tyne, United Kingdom, the company has grown organically, through acquisitions and, more recently, through subscription services.[31]

Financial results are as follows:[35] 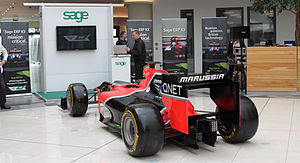 The Sage Group is a patron of The Sage Gateshead, a Tyneside music venue designed by Sir Norman Foster. The Sage Gateshead was completed in 2004 at a cost of £70 million, and has since become a main sight on the River Tyne. It is primarily used as a concert venue and centre for musical education, but also hosts other events including conferences.[14]

In 2008, Sage funded the revival of The Krypton Factor television series for ITV as a part of the Business Brain Training campaign.[36] Sage were the football shirt sponsor in May 2011 for Whitley Bay F.C.'s FA Vase winning match.[37]

Sage have sponsored the Invictus Games since 2016.[39] Sage also sponsored the 2019 editions of the Reading Half Marathon and the Blaydon Race.[40][41]