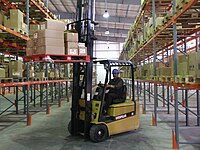 Warehouses are used to store goods that are being distributed.

Distribution (or place) is one of the four elements of the marketing mix. Distribution is the process of making a product or service available for the consumer or business user who needs it. This can be done directly by the producer or service provider, or using indirect channels with distributors or intermediaries. The other three elements of the marketing mix are product, pricing, and promotion.

Decisions about distribution need to be taken in line with a company's overall strategic vision and mission. Developing a coherent distribution plan is a central component of strategic planning. At the strategic level, there are three broad approaches to distribution, namely mass, selective and exclusive distribution. The number and type of intermediaries selected largely depends on the strategic approach. The overall distribution channel should add value to the consumer.

Prior to designing a distribution system, the planner needs to determine what the distribution channel is to achieve in broad terms. The overall approach to distributing products or services depends on a number of factors including the type of product, especially perishability; the market served; the geographic scope of operations and the firm's overall mission and vision. The process of setting out a broad statement of the aims and objectives of a distribution channel is a strategic level decision.

In an intensive distribution approach, the marketer relies on chain stores to reach broad markets in a cost efficient manner.

Strategically, there are three approaches to distribution:[3]

Summary of strategic approaches to distribution

In consumer markets, another key strategic level decision is whether to use a push or pull strategy. In a push strategy, the marketer uses intensive advertising and incentives aimed at distributors, especially retailers and wholesalers, with the expectation that they will stock the product or brand, and that consumers will purchase it when they see it in stores. In contrast, in a pull strategy, the marketer promotes the product directly to consumers hoping that they will pressure retailers to stock the product or brand, thereby pulling it through the distribution channel.[7] The choice of a push or pull strategy has important implications for advertising and promotion. In a push strategy, the promotional mix would consist of trade advertising and sales calls while the advertising media would normally be weighted towards trade magazines, exhibitions, and trade shows while a pull strategy would make more extensive use of consumer advertising and sales promotions while the media mix would be weighted towards mass-market media such as newspapers, magazines, television and radio.[8]

Distribution of products takes place by means of a marketing channel, also known as a distribution channel. A marketing channel is the people, organizations, and activities necessary to transfer the ownership of goods from the point of production to the point of consumption. It is the way products get to the end-user, the consumer. This is mostly accomplished through merchant retailers or wholesalers or, in the international context, by importers. In certain specialist markets, agents or brokers may become involved in the marketing channel.

Typical intermediaries involved in distribution include:

In practice, many organizations use a mix of different channels; a direct sales force may call on larger customers. This may be complemented with other agents to cover smaller customers and prospects. When a single organisation uses a variety of different channels to reach its markets, this is known as a multi-channel distribution network. In addition, online retailing or e-commerce is leading to disintermediation, the removal of intermediaries from a supply chain. Retailing via smartphone or m-commerce is also a growth area.

To motivate intermediaries the firm can use positive actions, such as offering higher margins to the intermediary, special deals, premiums and allowances for advertising or display.[5] On the other hand, negative actions may be necessary, such as threatening to cut back on margin, or hold back delivery of product. Care must be exercised when considering negative actions as these may fall foul of regulations and can contribute to a public backlash and a public relations disaster.

The advent of "category killers", such as Australia's Officeworks, has contributed to an increase in channel switching behaviour.

Channel-switching (not to be confused with zapping or channel surfing on TV) is the action of consumers switching from one type of channel intermediary to a different type of intermediary for their purchases. Examples include switching from brick-and-mortar stores to online catalogues and e-commerce providers; switching from grocery stores to convenience stores or switching from top tier department stores to mass market discount outlets.[12] A number of factors have led to an increase in channel switching behaviour; the growth of e-commerce, the globalization of markets, the advent of Category killers (such as Officeworks and Kids 'R Us) as well as changes in the legal or statutory environment. For instance, in Australia and New Zealand, following a relaxation of laws prohibiting supermarkets from selling therapeutic goods, consumers are gradually switching away from pharmacies and towards supermarkets for the purchase of minor analgesics, cough and cold preparations and complementary medicines such as vitamins and herbal remedies.[13]

For the consumer, channel switching offers a more diverse shopping experience. However, marketers need to be alert to channel switching because of its potential to erode market share. Evidence of channel switching can suggest that disruptive forces are at play, and that consumer behaviour is undergoing fundamental changes. A consumer may be prompted to switch channels when the product or service can be found at cheaper prices, when superior models become available, when a wider range is offered, or simply because it is more convenient to shop through a different channel (e.g. online or one-stop shopping).[14] As a hedge against market share losses due to switching behaviour, some retailers engage in multi-channel retailing.[15]