Difference between revisions of "Company" 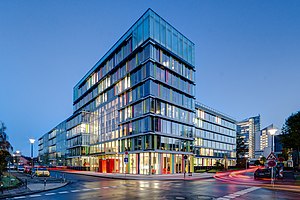 A company, abbreviated as co., is a legal entity representing an association of people, whether natural, legal or a mixture of both, with a specific objective. Company members share a common purpose and unite to achieve specific, declared goals. Companies take various forms, such as:

A company can be created as a legal person so that the company itself has limited liability as members perform or fail to discharge their duty according to the publicly declared incorporation, or published policy. When a company closes, it may need to be liquidated to avoid further legal obligations.

Companies may associate and collectively register themselves as new companies; the resulting entities are often known as corporate groups.

A Company can be defined as an "artificial person", invisible, intangible, created by or under law,[1] with a discrete legal personality, perpetual succession, and a common seal. Except for some senior positions, companies remain unaffected by the death, insanity, or insolvency of an individual member.

The English word company has its origins in the Old French term compagnie (first recorded in 1150), meaning a "society, friendship, intimacy; body of soldiers",[2] which came from the Late Latin word companio ("one who eats bread with you"), first attested in the Lex Salica (English: Salic Law) (circa 500 CE) as a calque of the Germanic expression gahlaibo (literally, "with bread"), related to Old High German galeipo ("companion") and to Gothic gahlaiba ("messmate").

In English law and in legal jurisdictions based upon it, a company is a body corporate or corporation company registered under the Companies Acts or under similar legislation.[7] Common forms include:

In the United Kingdom, a partnership is not legally a company, but may sometimes be referred to (informally) as a "company". It may be referred to as a "firm".

In the United States, a company may be a "corporation, partnership, association, joint-stock company, trust, fund, or organized group of persons, whether incorporated or not, and (in an official capacity) any receiver, trustee in bankruptcy, or similar official, or liquidating agent, for any of the foregoing".[8][9] In the US, a company is not necessarily a corporation.[10]

Less common types of companies are:

When "Ltd" is placed after the company's name, it signifies a limited company, and "PLC" (public limited company) indicates that its shares are widely held.[13]

In the legal context, the owners of a company are normally referred to as the "members". In a company limited or unlimited by shares (formed or incorporated with a share capital), this will be the shareholders. In a company limited by guarantee, this will be the guarantors. Some offshore jurisdictions have created special forms of offshore company in a bid to attract business for their jurisdictions. Examples include "segregated portfolio companies" and restricted purpose companies.

There are, however, many, many sub-categories of types of company that can be formed in various jurisdictions in the world.

Companies are also sometimes distinguished for legal and regulatory purposes between public companies and private companies. Public companies are companies whose shares can be publicly traded, often (although not always) on a stock exchange which imposes listing requirements/Listing Rules as to the issued shares, the trading of shares and future issue of shares to help bolster the reputation of the exchange or particular market of an exchange. Private companies do not have publicly traded shares, and often contain restrictions on transfers of shares. In some jurisdictions, private companies have maximum numbers of shareholders.